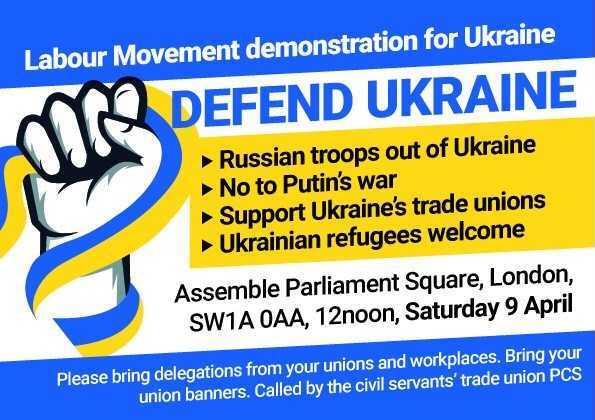 A union led march and rally is due to take place in London this Saturday, 9th April, with trade unions condemning the Russian invasion of Ukraine and calling for the immediate withdrawal of the Russian army.

Backed by unions including the PCS, GMB, CWU, UCU as well as ASLEF, TSSA, NUM, and the Bakers Union, members will assemble outside Parliament square from noon. The demonstration is also being backed by Ukrainian trade unions including the Federation of Trade Unions of Ukraine (known by its Ukrainian acronym, FPU) an all-Ukrainian voluntary association of trade unions. It is the largest trade union confederation in Ukraine, with more than 4.8 million members.

A statement ahead of the demo said: “We condemn the Russian invasion of Ukraine and call for an immediate ceasefire and withdrawal of Russian troops from all of Ukraine.

“The Russian government’s violence has caused thousands of Ukrainian deaths and forced millions to flee their homes. We stand with the people of Ukraine in this time of their suffering.

“As a trade union movement, we call for a just peace. We urge all governments to reach a negotiated solution. We send solidarity to the trade unionists of Ukraine who have been engaged in humanitarian assistance and resistance to the invasion.”

Gary Smith, GMB general secretary, said: “I’m sending solidarity greetings to all of our members and indeed all of the trade unionists attending the demonstration in support of Ukraine this weekend.

“This a really important demonstration and it gives the trade union movement an opportunity to say unequivocally to our sisters and brothers in Ukraine that we oppose Putin’s aggression, we stand in solidarity with you against Russian imperialism and we are on your side.

“I am proud that our union has been absolutely unequivocal in condemning the atrocities carried out by the Putin regime and in our support of Ukrainian trade unionists and Ukrainian people.”

Demonstrators will assemble outside Parliament square from noon, followed by a rally at Downing Street.

Mind Your Own Business