Leo Varadkar said he has “never seen relations as bad” between London and Dublin. 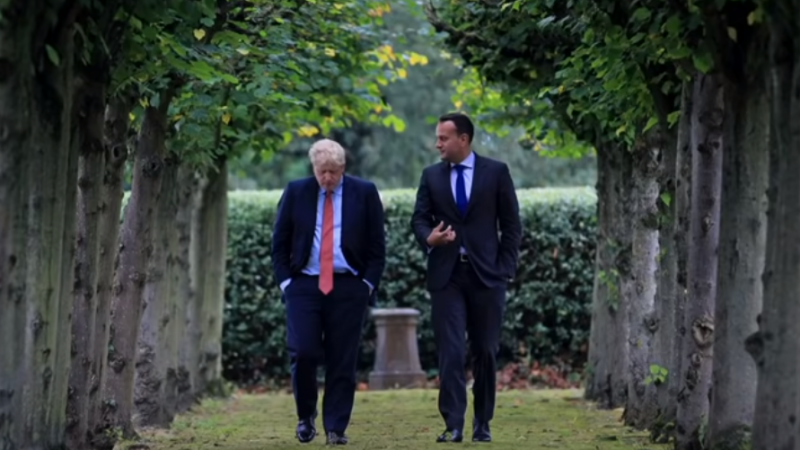 The Irish deputy prime minister Leo Varadkar has said Ireland and the EU may have to wait until the UK government has a new leader before the fall-out over post-Brexit trade rules for Northern Ireland can finally be settled.

In 2019, during Brexit negotiations when Leo Varadkar was Taoiseach, the now deputy prime minister for Ireland had met Johnson on the Wirral, where they reached a “pathway towards an agreement”, which ultimately led to the protocol on Ireland and Northern Ireland.

As threats about the UK government’s plans to tear parts of that agreement up surfaced, Varadkar reminisced on the meeting, saying he and Johnson had agreed on the deal, so what has happened to that good faith?

Now, as MPs vote on a bill to override parts of the NI post-Brexit agreement, Varadkar is criticising the government for not being ‘even handed’ and warning Johnson may have to go before the row can be resolved.

Speaking on June 30, Varadkar accused Johnson of favouring destructive fight-picking with the EU and ignoring majority opinion in the divided UK. Saying he had “never seen relations as bad” between London and Dublin, Varadkar condemned Johnson’s plan to impose legislation that overrides key parts of the protocol agreement.

Talking to BBC Belfast, Varadkar referred to the lack of trust with the current UK government. “Trust needs to be restored… If we can’t with this [British] government, then a future government,” he said.

UK government has not been ‘even handed’

Varadkar continued that he does not think the UK government has been “even handed” in resolving the protocol row.

“In the past commitments were given by UK governments that it would be even handed in its approach to Northern Ireland. I don’t think that’s the case when it comes to this government. They’re siding with one of the three blocks, if you like, of opinion that now exist in Northern Ireland.

“I think that’s a strategic mistake for people who want to preserve the union, by the way, because if you continue to impose things on Northern Ireland that the clear majority of people in Northern Ireland don’t want, more people will turn away from the union in my view, so it’s a peculiar policy coming from a government that purports to want to defend the union,” Ireland’s deputy prime minister added.

MPs vote on bill to override parts of protocol

Varadkar’s comments come just days after MPs vote on a bill to override parts of the NI post-Brexit agreement, after Boris Johnson downplayed concerns over legal challenges. Earlier this week, the UK government’s plans to rewrite the protocol passed their first hurdle in Parliament. 295 MPs voted in favour of allowing ministers to scrap parts of the protocol, despite repeated warnings by former PM Theresa May that it breaches international law.

The bill would enable ministers to change the part of the agreement that was reached in 2019, which introduced post-Brexit checks on goods sent from the UK to Northern Ireland.

Foreign secretary Liz Truss claims there was no other option to “fix” the issues the deal has created.

A ‘clear breach’ of international law

The plan to rip up Brexit trade rules has created a huge backlash in Europe, slammed as being a ‘clear breach’ of international law. Firmly opposing the move, the EU has said it is considering launching legal action again the UK. Maro Sefcovic, European Commission vice-president, said it was with “significant concern” that the bloc takes note of the UK’s decision to table legislation “disapplying core elements of the protocol.”

Sentiment shared by German foreign minister Annalena Barerbock, who warned that peace and prosperity on the island of Ireland is “not a pawn.”

“We will react as one to this breach of trust,” she said.