Warnings have been made that the stamping out of free testing will leave those on the lowest incomes and the most vulnerable paying the price. 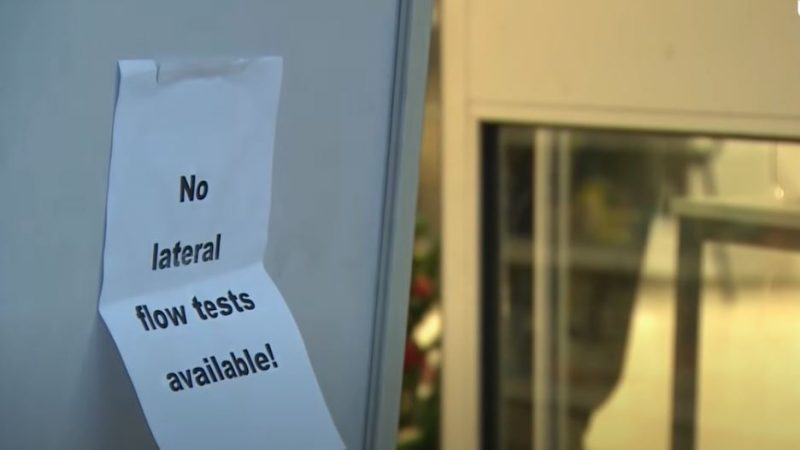 Bleak Friday, National Price Hike Day, April Cruel Day, were some of the headlines describing the day that saw countless rises to the cost of living, as households are hit by the biggest drop in living standards since the 1950s.

Adding to the anguish is the ending of free mass Covid testing in England.

As from April 1, most people in England can no longer get free PCR or lateral flow tests (LFTs). Some free tests will continue to be available in Wales until the end of June and in Scotland until the end of April. Certain groups will still be eligible for free testing in England, including the over-75s and the over-12s with weakened immune systems.

The ending of what was hailed by the government throughout 2020 and 2021 as “key to getting back to normal” and a way of “saving lives” comes as Covid cases soar to a new record high. With one in 15 people having the virus, cases rose by 7% in a week, new study figures have shown.

Despite hospital admission rates of Covid-19-confirmed patients increasing to 17.89 per 100,000 people in the week ending March 20, 2022, the government insists it is time to adjust to living with the virus.

The government’s ‘living with Covid’ mantra includes the ending of free Covid tests.

Like how the Covid-19 pandemic hit the poorest the hardest, warnings have been made that the stamping out of free testing will leave the worst off and most vulnerable paying the price.

Among those voicing such concerns is Mary Kelly Foy, Labour MP for Durham. The MP was joined by council leaders in the North East in urging people to remain ‘cautious’ as Boris Johnson announced his ‘Living with Covid’ plan.

Kelly Foy said it would be ‘reckless’ to start ignoring Covid now.

“It’s staggering that when the scientific evidence shows that we are beating the virus, the government has chosen to get rid of the key ways in which we have been tracking the virus’ spread.

“Removing free mass testing is a short-sighted decision which will hit poorest hardest, but also risks costing many much more.

“Living with covid does not mean we can just ignore it – it is reckless to think otherwise,” said the Labour MP.

Foy’s concerns were disparaged by Richard Holden, Tory MP for North West Durham, who, in arguing for the removing of restrictions, said, “Britain is a freedom loving country”.

He added: “I am absolutely delighted that the Prime Minister has said that he will now remove all restrictions over the next six weeks.

“Now is the moment where we need to learn to live with Covid as an endemic virus in our towns and villages.”

After ministers were accused of leaving NHS staff in the dark as to whether they would be forced to pay for Covid tests, this week saw the government announce free testing will still be available to certain groups, including patient-facing staff in the NHS and NHS-commissioned independent healthcare providers, staff in hospices and adult care services such as care homes.

However, the announcement falls short of other vulnerable groups, including unpaid carers, who have lost access to free testing.

Data from Carers UK shows that in 2020, there was an estimated 13.6 million unpaid carers in the UK. Each day, another 6,000 people take on a caring responsibility. 5 million people in Britain are juggling caring responsibilities with work, equating to 1 in 7 of the workforce.

This large segment of the population is twice as likely to have used a food bank during the pandemic. As of June 2020, over 100,000 people caring for an older or disabled person without getting paid relied on food banks to get by.

In the wake of April 1’s ending of free coronavirus testing, unpaid carers on limited incomes, some of whom are already being forced between choosing heating or eating, are concerned they won’t be able to afford Covid tests as cases rise and the cost of living skyrockets.

Talking to iNews, unpaid carers said they feel as if the government is trying to kill them off by no longer giving them access to free testing. Martin and Sue McGowan, 69 and 65, from Shrewsbury, both have several medical conditions and care for each other. The couple said they fear not having access to free testing and would not be able to afford to pay for tests alongside other cost of living rises, such as heating their home.

Joe Levenson, executive director of Policy and External Affairs at Carers Trust, spoke of the struggle the poorest and most vulnerable households are facing: “It’s going to be a real struggle for people who are struggling to make ends meet already, who are facing rising living costs, who are probably disproportionately likely to spend their time at home and so are likely to be hard to hit by increase in energy bills,” said Levenson.

An ’experiment aimed at the poor’

Senior health figures in the North East of England described the lifting of Covid restrictions, including the ditching of free testing, as “an experiment aimed at the poor.”

Newcastle councillor John-Paul Stephenson said the changes will prove to be one of the “biggest scandals of health inequities of our generation,” adding: “This Eton muppet shows complete contempt for ordinary people, and especially those in areas of high deprivation.

“Free universal testing will end on April 1 – that date is fitting for that complete fool, desperate to distract from the national shame of our Prime Minister being under police investigation for breaking his own rules. It’s not funny anymore.”